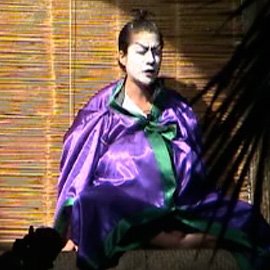 Cabaret performance by Jesusa Rodríguez and Liliana Felipe, exploring the downside of social indifference and the power of civil disobedience as an effective form of civic participation through which to enact political, cultural and social changes in the public sphere. An anthropologist for 'Discovery Chafa' (a parody of ethnographic documentaries on American television) researches a tribe of Latin American indigenous people, the 'Yanomami', joining them in a continental search for their lost gods. Western and Eastern cultures - characterized as representing 'el Tener' (to have) and 'el Ser' (to be), respectively - are represented as two pseudo gods attempting to be recognized as the 'universal' Culture. Countering this battle of wills, the piece propose (through satiric eschatological dialogues and parodic twists) a rupture of the Manichean East/West binary, favoring a 'third option', that of 'Saber Estar' (to know how to be in a place), attributed to native civilizations; this option intends to open up a space for empowering and incorporating indigenous people in contemporary national projects - projects which tend to isolate them in discourses of Romantic myths of origin, while being considered technologically and culturally 'backward'. Furthermore, the artists invite the audience to have a critical approach not only to foreign political and cultural agendas, but more urgently, to Mexico's current governmental agendas (among them, the effects of NAFTA on civil society). Civil disobedience is proposed as an effective tool for civic participation; the audience is invited to join the 'Enemigos de Fox' club (a fictional opposition club against Mexican president Vicente Fox) and to publicly express their discontent with the political and economic situation of contemporary Mexico.