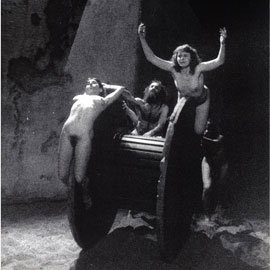 Ói Nóis found in the Greek Tragedy of Sophocles a space to discuss the civil disobedience of the individual against the oppression of the State. The play is adapted into an environmental performance, beggining with the battle between Thebes and Argos in the courtyard of the Terreira, and progressing through the five different environment the audience crosses, including a desert covered in tons of sand. The adaptation does not follow the classical structure but is divided into a non-realistic sequence of 30 scenes, including a dialogue between a mother and a son who deserted war, an added scene that tells the story from the point of view of the people instead of that of nobility, which classical tragedy privileges. The performance lasts three hours and accomodates fifty spectators, who are invited both to watch and to participate in scenes such as the "Bacchanal", featuring the cutting off and ritual burial of a giant phallus that Creonte wears by a Maenad. Text fragments from Camus, Artaud, Brecht, Nietzsche, Heiner Müller, Julian Beck, and several other authors, are intertwined into the narrative with the purpose of opening up the Greek story into other political situations.